Architecture: Exterior of the Church 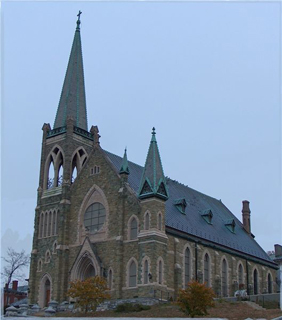 The beautiful Gothic revival Church of St. Francis of Assisi (exterior view at left) was built to accommodate the booming growth of the Irish Catholic population in Staunton in the late 1880s. The double cornerstone was officially laid in 1895 by the Bishop of Richmond, the Most Reverend Augustine Van DeVyver. The 1850 date on the left cornerstone commemorates a previous smaller building, the foundations of which remain beneath the floor of the present building; the 1895 date on the right cornerstone commemorates the present structure. The same period of growth fostered the parish rectory, built in 1873-74, and a convent school, erected in 1880.

A parishioner, Thomas J. Collins, was the church architect whose career also included designing many other landmark buildings in Staunton and vicinity. The local newspaper account of the dedication of the building in 1897 describes the architectural style of the building as English Gothic.

American architecture of the late nineteenth century featured a revival of several much earlier styles. Architect T. J. Collins was actively involved in the revival movement. The Gothic style, distinguished by its characteristic pointed arches, was prominent among the revival styles and is most often seen in church architecture. As with its medieval Gothic predecessor of the twelfth to fifteenth centuries, the spiritual goal of Gothic revival architecture is to lead the beholder to mystically reach towards the heights of Heaven, making the Gothic style especially favored among Roman Catholic parishes. The pointed Gothic arches are a prominent feature of the exterior of St. Francis Church, especially in the door and windows; the Gothic arch is repeated in the decoration and in the rib vaulting of the interior. Thus inside and out, the Gothic lines of St. Francis Church summon the worshippers to lift their minds and hearts toward their celestial home where the throne of God towers above all creation.

Until 2015 the exterior of St. Francis Church was finished in Pennsylvania ashlar greenstone on the south, north, and west walls. The stone was transported by rail to Staunton from the quarry in Chester County, Pennsylvania. The story is told that T. J. Collins was encouraged by his wife to choose the greenstone to honor the native Irish homeland of the overwhelming majority of the parishioners. The foundation throughout the building is Indiana limestone. The less-visible eastern apse and north walls are constructed of native brick. Several copper finials which once adorned the west facade were subsequently removed because of storm damage. 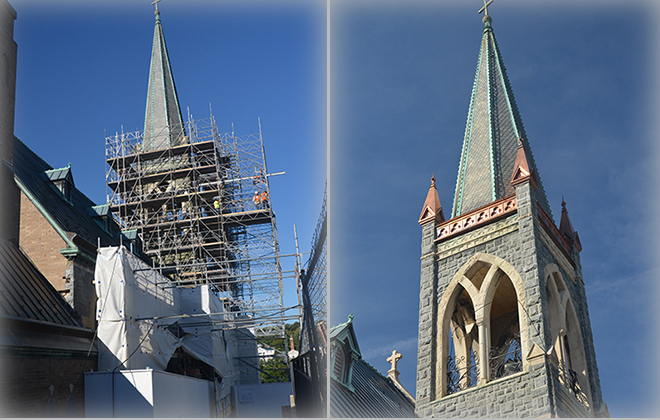 Water damage to the exterior of the church building (as evidenced most dramtically by fallng bits of the greenstone facade) necessitated an engineer’report on future prospects. The verdict was a stark judgment that the greenstone had to be replaced. Then-pastor Joseph Wamala led a campaign to raise the large sum needed for this major work; diocesan funding was also crucial to success. The greenstone was replaced with gray granite, a job that lasted through 2015-2016, concluding with the dedication of the new structure by Bishop DiLorenzo of Richmond on May 8, 2016.

The church design is that of a basilica, a plan which was adapted from Roman architecture by the Early Christians. The single longitudinal nave with no transept (or arms) terminates in a curved apse to house the altar. The church is oriented to the points of the compass, again a tradition since the Early Christian era. The main entry faces west where the sun sets. The altar is in the east end, facing Jerusalem as well as the rising sun, a symbol of rebirth and renewal. The north side of the church was that from which the Old Testament lesson was read; the south side of the church, the area which receives the most sun, was the side from which the Gospel lesson was read. Thus the architectural plan and orientation of the church complemented the church liturgy. Still today the entering worshippers symbolically move from the temporal world into the unearthly splendor of the church, a place of heaven on earth, and toward new life as they move from west to east to celebrate the Holy Sacraments in the region of rebirth and renewal. The Ascension window over the entry way, visible upon departing, affirms Christ’s promise of eternal life to the worshipper in the celebration of each Mass.