During the years 1858-1870, St. Francis was served by several priests. The Reverend T. O. Sears, a convert, was pastor from 1859-60. His charge also included Harrisonburg, Charlottesville, Mountain Top, and other stations; Lexington again became a mission of Lynchburg. During 1861 Staunton had no resident priest but was visited every fourth Sunday by a priest from Richmond. Father Sears frequently administered the sacraments of Baptism and Matrimony at St. Francis, as did the Reverend John Teeling. Catholic families from the missions often had to travel to Staunton to receive the Sacraments.

During the War Between the States the Reverend Joseph Bixio, S.J., was in Staunton. An interesting account of his missionary work in Harrisonburg was given by Robert J. Sullivan (Sullivan, p. 1). The Harrisonburg mission included sixteen Catholic families, eight in the city and eight in Rockingham County. Father Bixio would write to Edward Sullivan, the postmaster and a staunch Catholic, when he was coming to say Mass. The Catholic boys would spread the news to families in the county.

In addition to his pastoral duties, Father Bixio served as a Confederate chaplain. He served both sides in this capacity. While anointing an ill Union soldier, the priest appropriated the soldier’s uniform and then used the disguise to procure supplies for the parishioners in Staunton. In 1866 Father Bixio went to California because he was in danger of prosecution for impersonating a Union chaplain.

The Reverend J. Ambler Weed was appointed permanent pastor of St. Francis in 1867. He was an Episcopal priest prior to his becoming a Roman Catholic. During his tenure the present school building was erected. Also at that time the Eastern Shore parishes were transferred to the Diocese of Wilmington because there was no convenient access to these counties from Richmond.

Father Weed died on March 23, 1871. A tribute to his good work is the fact that at the time of his death six hundred Catholics were registered as members of the parish and seventy pupils were enrolled in the school. 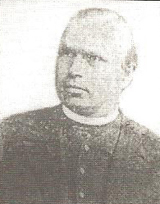 After the death of Father Weed, the Reverend John McVerry arrived to be pastor of St. Francis. He was a noted theologian and scriptural scholar and extremely well-versed in Irish lore. He was just what St. Francis needed. The school was beginning to flounder due to the establishment of free public education in Staunton. The parish still included Harrisonburg, Charlottesville, and Waynesboro. The priests travelled by train on Saturday and returned on Monday after the 8 A.M. Mass. They were given lodging in the home of one of the parishioners. Father McVerry reestablished the school so that by 1873 there were 125 scholars and fourteen teachers. He also built the present rectory through subscription in 1873 and 1874. It was Italianate and had two rooms on each of three floors.

In December 1874, the Reverend John E. J. Reilly came to be the first assistant. He was followed in 1876 by the Reverend Peter Fitzsimmons. In 1878 Father Fitzsimmons was appointed pastor of the Church of the Assumption in Keyser, West Virginia. He was much loved and upon his departure he was given a handsome golden crucifix and ring and money totaling more than two hundred dollars from the congregations he had served. He also received one hundred dollars from the Bishop and twenty-five dollars from Father McVerry. Father Fitzsimmons died in Keyser of typhoid fever in 1880 at the age of thirty-three.

On April 5, 1874, a charter was granted to the Catholic Hibernian Beneficial Society. This was an ancient order brought to this country by the Irish. It was open to males from eighteen to forty-five years of age; members paid a membership fee of two dollars and dues of fifty cents per month. The purpose of the Society was to afford ”mutual aid and assistance to one another as well as to all those who may hereafter become members of this Society.” (Constitution and Bylaws, p. 3)

The Hibernians marked St. Patrick’s Day in 1874 with a banquet at which John J. McMahon, Captain John McQuade, Thomas J. Burke, Mayor N.K. Trout, and others spoke. There was a Solemn High Mass and the pupils of the school gave a musical program. This Society also engaged in fund-raising and service activities. For example, in 1883 the members gave a picnic at the Fair Grounds that was attended by one thousand people. They also enlarged the rectory in 1881.

During the 1870s Bishop James Gibbons, later Cardinal Gibbons, the fourth Bishop of Richmond, was rapidly improving religious conditions which had suffered during the War Between the States. One of his acts was to direct that all churches in the Diocese be dedicated to the Sacred Heart on the Sunday following Christmas in 1873. For this event the walls of St. Francis were adorned with wreaths, and the statue of the Virgin and Child was decorated with lace fringed with gold and with red and white flowers. Father McVerry preached. In his sermon he talked about the history of the devotion to the Sacred Heart, which goes back to the fourth century but didn’t become prominent until the seventeenth century in Europe when the Savior appeared to a nun of the Order of Visitation, showing her His heart wounded by the coldness and sins of those for whom He had died.

The future Cardinal made frequent visits through the Diocese, and his visits to Staunton for Confirmation were community events. On August 10, 1873, he confirmed forty persons. During this visit he praised the people of the parish for the evident manifestation of their faith and encouraged them to spread their faith into the outlying districts of the Valley. He seemed to be foreseeing the development of the neighboring parishes.

In 1876 the Catholics in Harrisonburg completed their church. The church was dedicated by Bishop Gibbons on August 6. The Reverend P. O. O’Keefe sang the High Mass. Father McVerry and the Reverend Thomas Murray acted respectively as deacon and subdeacon. Music for the ceremonies was provided by the choir from St. Francis Church. This is the earliest record of the St. Francis Choir, which had been organized upon the arrival in Staunton of a German music teacher, Mr. Frederick W. Walter, who taught music at the Augusta Female Seminary (now Mary Baldwin College). 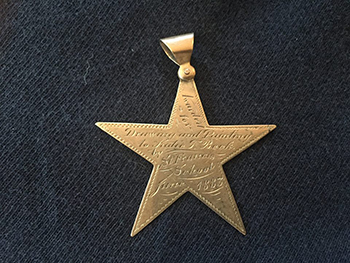 St. Francis School continued to prosper so that in 1878 Father McVerry petitioned the Sisters of Charity to take over the teaching duties. They required a more suitable facility; in 1880 the Sisters’ convent was built in Gothic style, attached to the school.


A New and Larger Church Is Built

In 1887 Bishop John J. Keane reported of his diocese that ‘Religion is in a healthy condition everywhere.’ And so it was in the parish of St. Francis” (MacLeod, p. 14), which celebrated the happy occasion of two vocations. The Reverend Timothy O’Brien and the Reverend Michael Dineen were the first young men from St. Francis of Assisi to enter the priesthood. 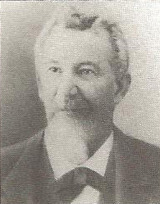 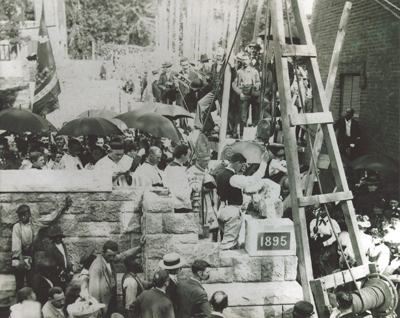 Bishop Van De Vyver blesses the cornerstone of the new St. Francis church in 1895 (the bishop’s mitre can be seen in the center of the photo, just to the left of the wooden scaffolding).

The climax of a steady growth in the Staunton church was reached with the laying of the new cornerstone on September 10, 1895, by Bishop Augustine Van De Vyver of Richmond, who preached the sermon. Holy water was used to bless the cross, the cornerstone, and the walls of the church. Assisting the Bishop were Father McVerry, assistant pastor Father W. G. Payne, Father Lynch of Roanoke, Father Charles Donohoe of Newport News, Father John Fallon of Clifton Forge, Father McGeery of Martinsburg, Father Kelly of Harper’s Ferry, and Father Collins of Ronceverte. The St. Francis choir sang “Veni Creator Spiritus,” and the ceremony was concluded with a selection from Mozart’s Twelfth Mass played by the Stonewall Brigade Band. The Catholic societies which turned out to do honor to the occasion were the Catholic Hibernian Beneficial Society of Staunton and St. Joseph’s Beneficial Society of Harrisonburg.

The new church was situated on the hill facing Augusta Street on the site of the old church, and the new church covered about two and one-half times as much area as the old church. The church was built in thirteenth-century English Gothic style. The stone walls and steps leading up to the church created the impression of a procession, an appropriate liturgical function in a church. The material of the stone walls, steps, and foundation was native limestone, and the superstructure was serpentine stone from Chester County, Pennsylvania. The green color of this stone blended with Indiana limestone which formed the trimming. A chapel and sacristy at the rear of the church were faced with Powhatan, Virginia, grey bricks with Indiana stone trimming.

The main doors were recessed and panelled in oak with an art glass transom which was replaced by Father Justs, who was pastor 1971-73. The stonework surrounding the doorway was finished with a Gothic gable, at the apex of which, twenty feet above the ground, was a handsome stone cross. The cross stood out in bold relief in front of a circular window which was eleven feet in diameter. According to the architect’s drawing, a Catherine wheel window was proposed. However, a memorial window to John Geary, the benefactor of the church, was substituted. It was executed by the Meyer Brothers of Munich, Germany, and cost eight hundred dollars. This window depicted the ascension of our Savior into heaven in the presence of his disciples. The church front was also finished with a gable capped with a heavy molded stone coping. On its peak was placed a second stone cross.

The church front was flanked on the left by the main spire and on the right by a smaller spire. In the base of the main spire was the entrance for the choir, which led to a handsome oak stairway. Three lance windows indicated the winding of the stairs. Above them were five narrow lance windows and above these windows were the openings for the belfry. The bell, four feet two inches wide and weighing twenty-five hundred pounds, was the largest in the city. It was cast in Baltimore by the McShane Bell Foundry Company. The inscription stated ”Erected in honor of St. Francis, Patron of the Church. Reverend John McVerry, Pastor. Reverend William Gaston Payne, Assistant.” The bell cost $400 and was a gift of the Hibernian Society. The members of the committee were Thomas Kivlighan (Chairman), James Dore, Dennis Brown, M. T. Bergin, and M. Kivlighan. The bell was so heavy that when a young boy tried to ring it, he was pulled off the floor.

The occasion of the dedication of the new St. Francis of Assisi Church on February 7, 1897, was noted in Staunton’s Spectator and Vindicator. A quartet from the Stonewall Brigade Band accompanied the St. Francis choir in sacred music for the Solemn High Mass, which was celebrated by Father McVerry. Bishop Van De Vyver delivered the sermon, and High Vespers were sung in the evening to conclude the celebration. 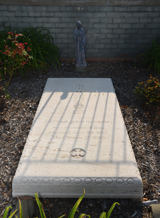 The grave of Father McVerry, located between the church and what is now the Ministry Center/Assisi Hall complex

Early in 1900 Father McVerry was transferred to another parish which he had established. He lived to be the oldest priest in Virginia and one of the oldest in the United States. When he died on March 27, 1930, at age eighty-five, a Pontifical Requiem Mass was celebrated by Bishop Andrew J. Brennan at St. Francis. The Reverend J. William Meredith, who had been an altar boy at St. Francis under Father McVerry, preached the sermon.

The body was interred at St. Francis according to Father McVerry’s request to be buried ”between the church and the school” which he had built. Father Emmett P. Gallagher, administrator at that time, had to seek special permission from the City of Staunton to satisfy this request.

*This history of Staunton’s Catholic parish is taken from A History of St. Francis of Assisi Parish, Staunton, Virginia: Celebrating 150 Years, 1845-1995 by Hampton H. Hairfield, Jr., Elizabeth M. Hairfield, and Jane E. Smith (published in 1995) and used with permission.